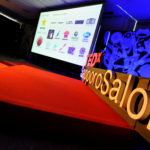 Opening TEDxSapporo was held at Intercross Creative Center on January 2013 with the theme : Connecting to the Future. It was snowing heavily outside, but 100 audience members came here with feverish excitement. It started with opening talk by Dilip BK Sunar who is the founder/organizer of TEDxSapporo at the beautiful stage. The stage was decorated by students at Hokusho University, who are young and bright. This is all about “Connecting the Future”. Then, this Salon was divided into 2 sessions. “TAWOO” The beating of Taiko(Japanese drums) boomed, chants to the music attracted us even more. It was TAWOO which gave an opening performance. TAWOO is the taiko group from Sapporo which gives the performance over the world. They warmed us up in cold winter with their splendid music and great energies. Some of members are little girls who are no more than 10 years old. They gave us an impression that they will connect TAWOO sounds to the Future. SESSION 1: RELEASE IDEAS AND WONDER “You can be a TEDster” Akira Kondo “Why do I watch TED?”, Akira Kondo who is a TED blogger started his presentation with the reason he watches TED. He has introduced TED videos on…