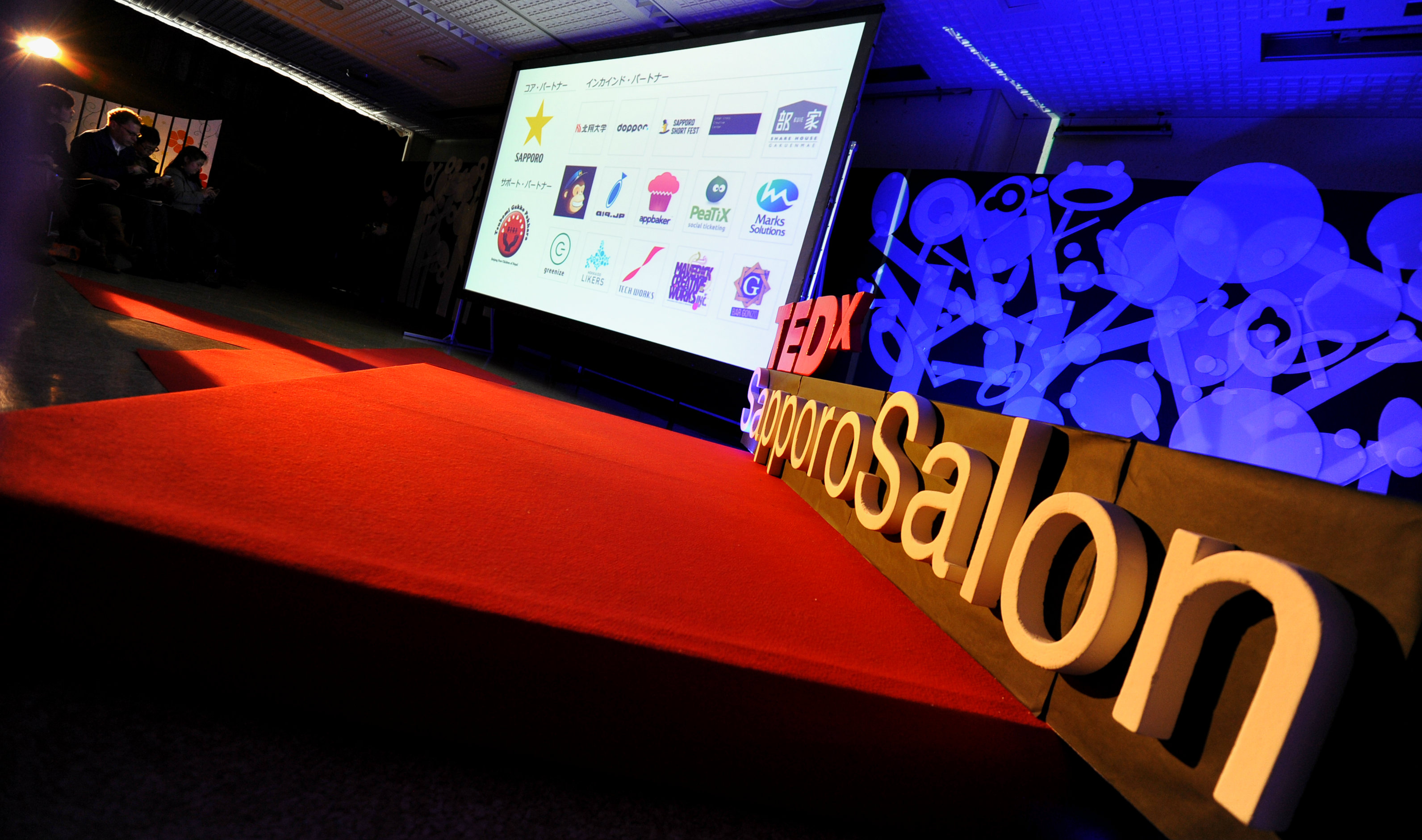 TEDxSapporo was held at Intercross Creative Center on January 2013 with the theme : Connecting to the Future. It was snowing heavily outside, but 100 audience members came here with feverish excitement. It started with opening talk by Dilip BK Sunar who is the founder/organizer of TEDxSapporo at the beautiful stage. The stage was decorated by students at Hokusho University, who are young and bright. This is all about “Connecting the Future”. Then, this Salon was divided into 2 sessions.

The beating of Taiko(Japanese drums) boomed, chants to the music attracted us even more. It was TAWOO which gave an opening performance. TAWOO is the taiko group from Sapporo which gives the performance over the world. They warmed us up in cold winter with their splendid music and great energies. Some of members are little girls who are no more than 10 years old. They gave us an impression that they will connect TAWOO sounds to the Future.

“You can be a TEDster” Akira Kondo

“Why do I watch TED?”, Akira Kondo who is a TED blogger started his presentation with the reason he watches TED. He has introduced TED videos on his blog which is “TED No Susume”(Recommendation for TED) since February 2012. He watches TED, because it makes him attractive. Giving a good first impression and being stylish are the tips for it. He learned and got them from TED, so he should be popular among girls, but he apologized suddenly. He is a single and out of job. However, something changed after he watched TED. Besides, taking an action brought him changes. He could see his sister’s smile whose passed away 10 years ago by doing Matt Cutts : 30 days challenge. Then, he gave a TED talk on the stage. These are his message “Everyone has his own story. Share it. Everyone can be a TEDster”.

You can watch his talk from here.

SESSION 2: CHALLENGE AND GO BEYOND

“What is TEDx in Japan?” Patrick Newell

Patrick Newell ,a Learning Activist who has been organized and found many international education schools and organizations, is a TEDxTokyo Founder. He talked about what TEDx is. He said Japan is the most creative intelligent country in the world, and TED and TEDx movement has been developing Japan’s creating confidence with its mission “Ideas Worth Spreading”. TED is not merely talking heads, but it is learning, sharing, and bringing all kind of people together. TEDx is a platform for an innovation. It inspires people to make dreams come true by developing communities and sharing ideas. TEDx movements arrived in Japan, and there are TEDx through Sapporo to Okinawa. The ultimate resources “TEDx” for hope, for passions, and for inspirations has been creating in Japan.

Atsuyoshi Saisyo who is a Student at Waseda University is Social Entreprenuer. He is tying to spread the innovative education system , “e-Education”, across five continents. “e-Education” is an education system which the best teachers give students lessons by DVDs. He started to introduce “e-Education” in Bangladesh where education system is so poor that there are not enough teachers. In addition, he is trying to help students who have a learning disability. Other students who take off a school joined “e-Education in five Continents”,too. They have to think solutions by themselves, and they have to take an action. The best teachers usually work at the rich. It is the point how to release them by technology and innovation.

“Connecting to Oneself” ANGELA REYNOLDS

ANGELA REYNOLDS ,who was born to a Japanese mother and British father, is an international model. She talked about her suffering from a terminal cancer. It was very hard to take an anti-cancer drug, and physically she was worn-out. However, she found something comfortable mentally. After taking an anti-cancer drug for a week she watched the sky and thought “ I want to kiss the sky”. At that time, she had only two things in her life: to live and to love. She even envies the past-herself for how happy she was. She thought suffering from the cancer was one of experiences in her life by sharing each other’s disease experiences with her friends. She came back to Japan after she got over the cancer. She loves being in Japan, but it is sad there are many barriers which makes people alone in Japan. We have to break it, and connect with others. Connecting to oneself is important before connecting to the others. Yoga lets people access to the core in oneself. She shared her experiences and Yoga.

Kenichiro Sasaki is the director of general coordination and planning, “Solaputi Kids’ camp”. When he was working in landscape planning, he heard there are one children out of 200 who has a serious illness. Their dreams are to play in the park. Then, he joined “Group to Establish Solaputi Kid’s Camp” which is a camp for family who have a child with serious illness. The family who came to this camp enjoyed it , and realized they were not only one who suffered, and there were comrade who support each other. The memory in this camp gives the children energy to live and to fight against their diseases. His goal is to make “Solaputi Kids’ Camp” as a home in children’s heart. Some kids who joined this camp came back there as a volunteer to give kids the same experience. Almost of facilities’ cost in this camp is covered by donation, although the donation culture is not prevailed in Japan. He is trying to change Japanese donation culture.

The last announcements gave the tremendous impacts. This TEDxSapporoSalon was our final salon. However, TEDxSapporo main conference will be held on July 27th. The theme is “Creating Possibility”. We will find speakers from Hokkaido, and we are looking for volunteers who want to join our team. You can apply it from out official site. If you want to Create Possibility, open yourself, sharing ideas, and take an action. “If not now, then when? If not me, then who?”