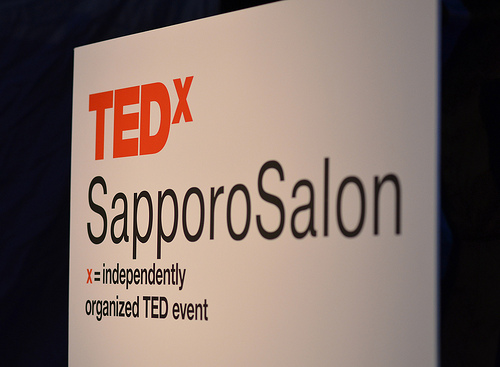 Open air in nature discussions, mass exchange of ideas; powered ‘TEDxSapporoSalon Vol.3′ but what TEDxSapporo missed  last month was ‘ TED Global 2012′ our presence in Edinburg ; but we brought the vision of TED Global and the theme to our Salon and  city naming ‘ The Power of Radical openness’. Rocking by the latest TED talk by Don Tapscott ‘ The four principles of Radical Openness; the crowd admired how simply the nature around us has already given us the perfect example of the strength of collaboration though we among around us has less thought of it.

TED has gone viral in Japan the last few months but less know the radical openness of TED, Watching the video of Chris Anderson ‘ The web global innovation‘, the community applause  loud  when Chris mentioned the TEDx and thanked the volunteers who has spent significant time, night and days with common vision of making a positive change, following the theme our Salon was geared up with meeting new people and knowing each other, sharing and collaboration and bring radically openness among our basics so we can possibly connect to innovation and social good.

We also invited our TEDx friend, TEDxHGU will be holding the first TEDx event in University in our region.

We believe the knowledge shared of the openness was extra-ordinary and we turned it into action even  for a day atleast,  We were also able to share the our mission  where we TED-esters and our TED community are putting extra energy to share a dialogue to  solve global issues., Discussion within countries have failed and we face the worst world crisis in this century though we can solve this by connecting people to people and to the communities.

TED and TEDx has no boundaries.